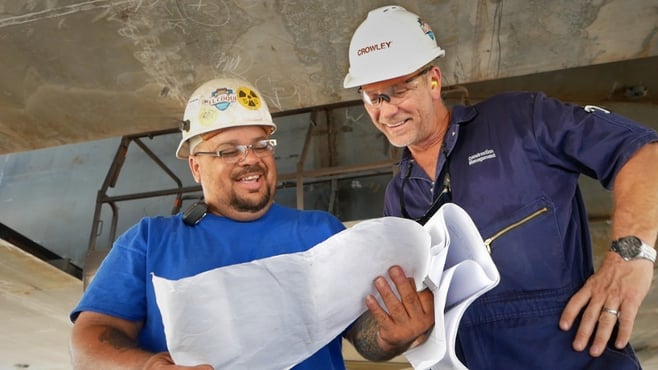 Highlighting the economic impact under the Jones Act of its $500 million investment in the trade between the U.S. mainland and Puerto Rico, Crowley Maritime Corporation’s liner services group reached new milestones in its construction of two new, Commitment Class ConRo (combination container and Roll/On-Roll/Off) ships that will be powered by liquefied natural gas (LNG), and in its terminal construction in San Juan.

The bow of El Coquí was recently set as shipbuilders at VT Halter Marine in Pascagoula, Miss., finished constructing the full length of the ship, aligned the main engine, and completed other work required to prepare the vessel for launching in early 2017. The LNG tanks also have also been installed and build-out of the engine room and main engine are underway on sister ship, Taíno.

As the ships take shape, Puerto Rican pride is evident in the shipyard where more than 160 of the nearly 1,000 employees building the ships are from Puerto Rico. A new video available here highlights the contributions of Puerto Rican workers toward reaching the milestones of the Commitment Class ships.

“I think it’s special because it’s (the ships are) going to Puerto Rico,” said Wilfredo Perez, a pipe foreman, of the project. “It’s going to create jobs back home.”

Additionally in Puerto Rico, construction involving some 200 Puerto Rican workers is accelerating as they build a new pier and make terminal improvements at Crowley’s Isla Grande port facility in San Juan, Puerto Rico. Concrete has been poured for the entire approach platform, and construction of the initial sections of the main pier is progressing. At the same time, construction of the new exit gate, electrical substation, and other improvements are proceeding on schedule. When completed, the terminal improvements, combined with the state-of-the-art ships, will offer customers increased efficiency and supply chain velocity as well as reduced landing costs.

This massive investment in ships and terminal infrastructure is made possible by the Jones Act, which requires that all goods transported by water between U.S. ports be carried on U.S.-flagged ships constructed in the United States, owned by U.S. citizens, and crewed by U.S. citizens and U.S. permanent residents.

“Despite some politicians seizing on Puerto Rico’s recent economic hardships to try to exempt the island from the Jones Act, Crowley’s $500 million private investment demonstrating the act’s benefit not just on the mainland, but to the people of Puerto Rico, directly providing jobs and new infrastructure to promote trade,” said John Hourihan Jr., senior vice president and general manager, Puerto Rico liner services. “The ships will carry on the next generation of trade for our company, whose relationship extends more than 60 years with Puerto Rico. There is no more apt name for our Puerto Rico ships than Commitment Class.”

The ship El Coquí is named for a beloved frog native to the island, and Taíno is named for the indigenous people of Puerto Rico.

“It’s actually doing it. It’s committing to Puerto Rico,” said Eddie Torres, an outfitting foreman, said of Crowley’s dedication to the shipbuilding program. “What I love best about are the names on the ships. … What better names? That’s Puerto Rican pride right there.”

Liquefied natural gas (LNG) is a stable gas that is neither toxic nor corrosive and is lighter than air, and it is the cleanest fossil fuel available. Designing, building and operating LNG-powered vessels is very much in line with Crowley’s overall EcoStewardship© positioning and growth strategy. The ships are designed to travel at speeds up to 22 knots while maximizing the carriage of 53-foot, 102-inch-wide containers. Cargo capacity will be approximately 2,400 TEUs (20-foot-equivalent-units), with additional space for nearly 400 vehicles in an enclosed Ro/Ro garage.