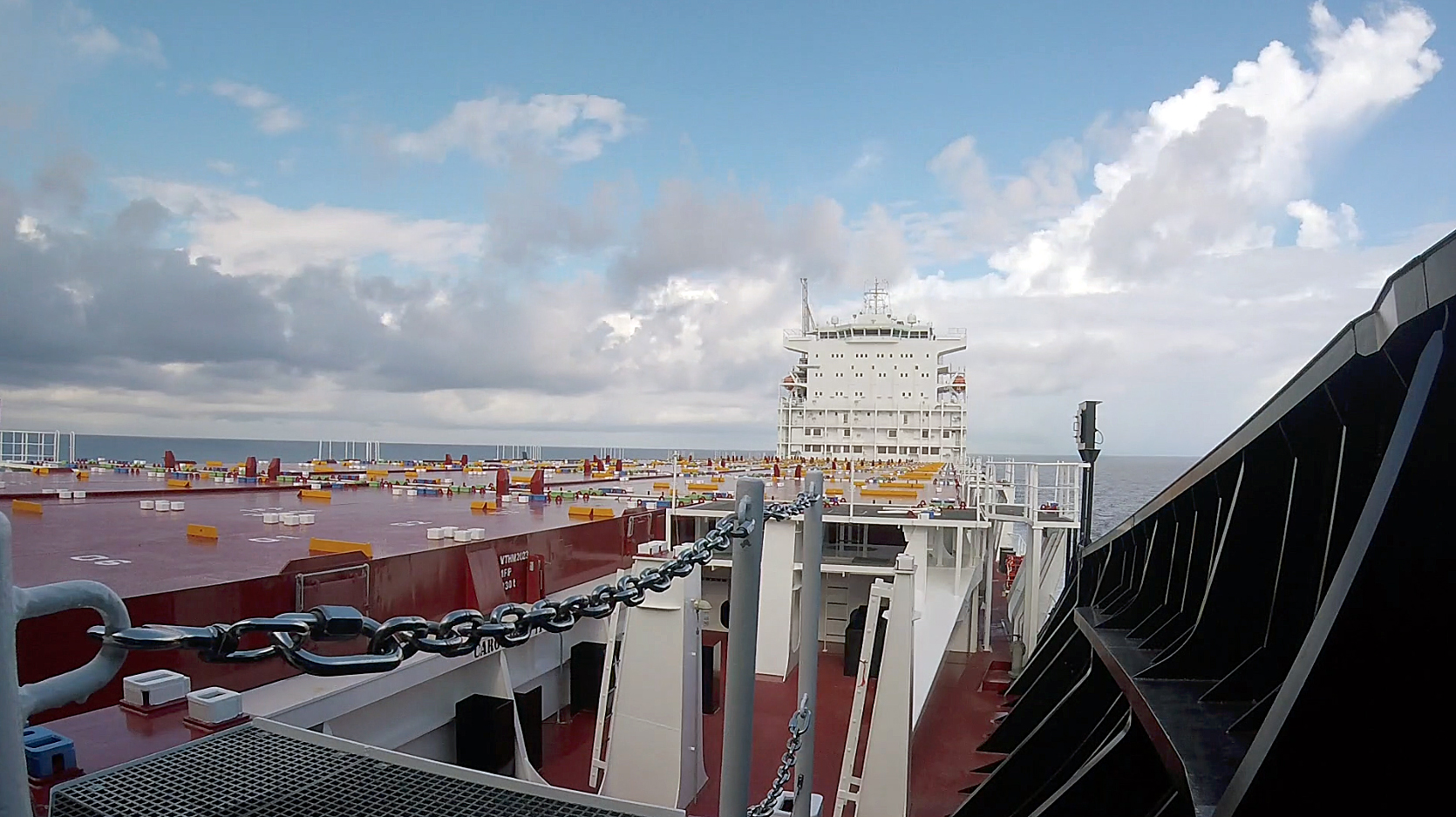 Prior to delivery on Dec. 19, 2018, Crowley and the ship's crew successfully carried out a sea trial of Taíno – the company's second of two of the world’s first combination container/roll on-roll off (ConRo) ships powered by liquefied natural gas (LNG) – with shipbuilder VT Halter Marine Inc., of Pascagoula, Miss., in preparation for her upcoming maiden voyage from Jacksonville, Fla., (JAXPORT) to San Juan, Puerto Rico.

The two LNG-powered vessels are part of Crowley's major modernization of the Puerto Rico-U.S. mainland trade that have added velocity to the island's supply chain. 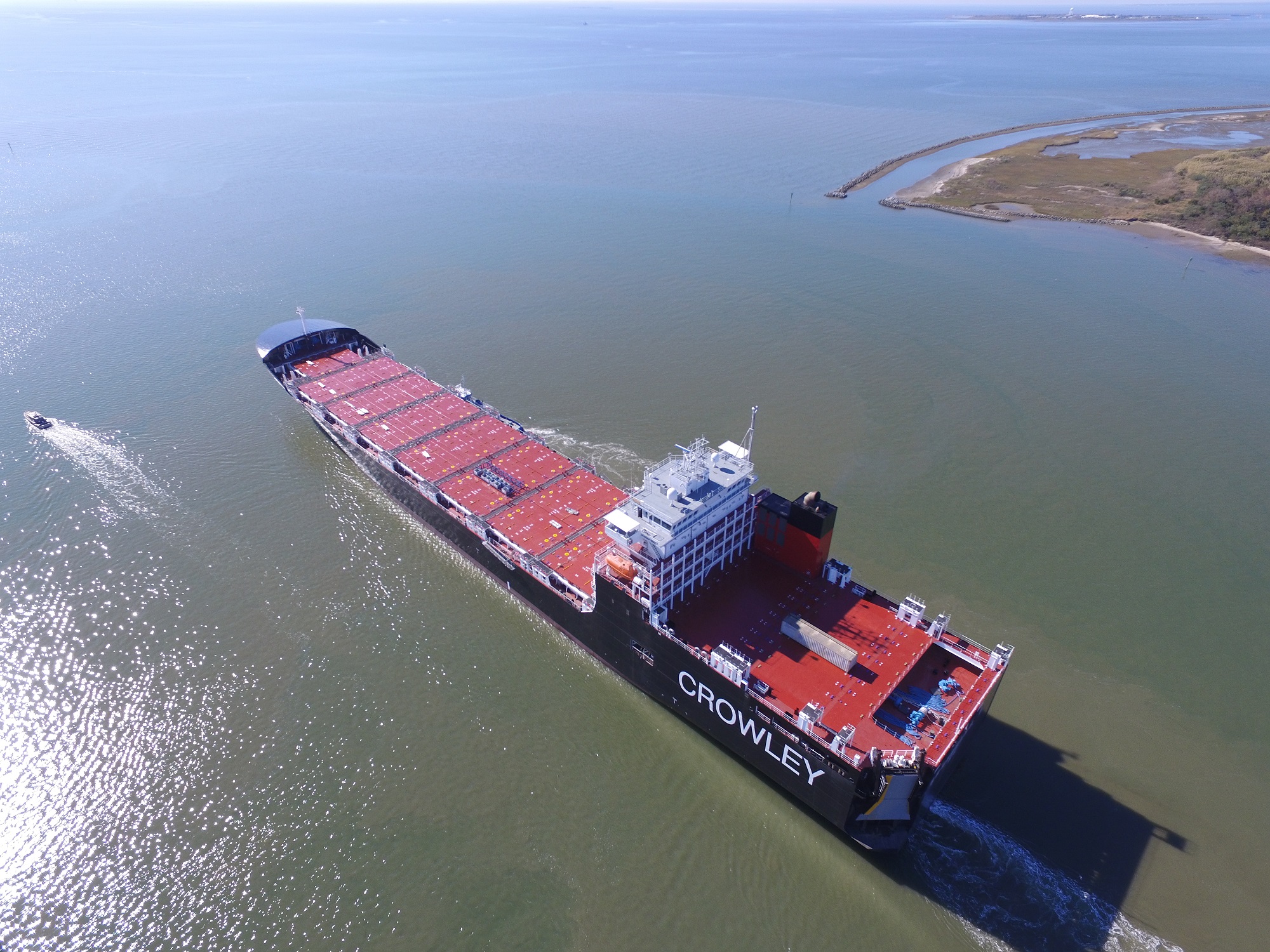 Taíno will soon join sister ship El Coquí, which was delivered in July, in providing fast, reliable and environmentally friendly shipping and logistics services between Jacksonville, Fla., and San Juan, Puerto Rico. This major milestone marks the final chapter in construction of Crowley’s $550 million investment in the two newly built, Commitment Class ships and associated port upgrades. The resulting ships and port facilities have elevated the company’s Puerto Rico supply chain services to world-class standards as a new era begins in the company’s longtime logistics services for the island.

Taíno, like El Coquí, will be operated by Crowley’s global ship management group. She is scheduled to make her maiden voyage to San Juan on Jan. 8 from her dedicated U.S. mainland port in Jacksonville, JAXPORT.

The new Crowley ships, built specifically for the Puerto Rico trade, are 219.5 meters (720 feet), 26,500 deadweight tons (DWT), and can transport up to 2,400 twenty-foot-equivalent container units (TEUs) at a cruising speed of 22 knots. A wide range of container sizes and types can be accommodated, including 53-foot by 102-inch-wide, high-capacity containers, up to 300 refrigerated containers, and a mix of about 400 cars and larger vehicles in the enclosed and ventilated Ro/Ro decks. This type of shipboard garage is offered exclusively by Crowley in the trade.

“I want to congratulate and thank all the men and women at Crowley and VT Halter Marine who helped to bring these marvelous new ships to life,” said Tom Crowley, company chairman and CEO. “They are shining examples of maritime innovation and craftsmanship available right here in the United States thanks to the Jones Act.”

“From a business standpoint, Taíno and El Coquí are key components of our integrated logistics offerings that are bringing speed to market and creating a competitive advantage for our customers in Puerto Rico and the Caribbean,” Crowley said. “With our own vessels and proprietary transportation and distribution network, we’re reducing friction and complexity while increasing the velocity of customers’ goods moving to market and reducing their landed costs.”

Construction was managed in the shipyard by Crowley Solutions. This team included naval architects and engineers from company subsidiary Jensen Maritime.

"The men and women of American Maritime Officers stand with Crowley in celebrating the Taíno's commencement of service in the Jones Act Puerto Rico trade," said Paul Doell, national president of AMO, the union that represents the licensed officers aboard the Commitment Class ships. "We're proud to be part of Crowley's expanding cargo service between the mainland and Puerto Rico and the ongoing innovation under the U.S. flag as America's next-generation fleet of LNG-powered vessels continues to grow."

Taíno is named for the native Puerto Ricans who lived off the land with great appreciation and respect for their environment, and El Coquí is named for the popular indigenous frog on the island.

Fueling the ships with LNG reduces emissions significantly, including a 100-percent reduction in sulphur oxide (SOx) and particulate matter (PM); a 92-percent reduction in nitrogen oxide (NOx); and a reduction of carbon dioxide (CO2) of more than 35 percent per container, compared with current fossil fuels. Working with Eagle LNG Partners, the ships are bunkered from a shoreside fuel depot at JAXPORT.

The Jones Act is a federal law that regulates maritime commerce in the United States. The Jones Act requires goods shipped between U.S. ports to be transported on ships that are built, owned and operated by United States citizens or permanent residents. Also known as the Merchant Marine Act of 1920, the law is vitally important to maintaining a strong U.S. maritime capability.

Crowley has served Puerto Rico since 1954, longer than any other U.S. shipping company. 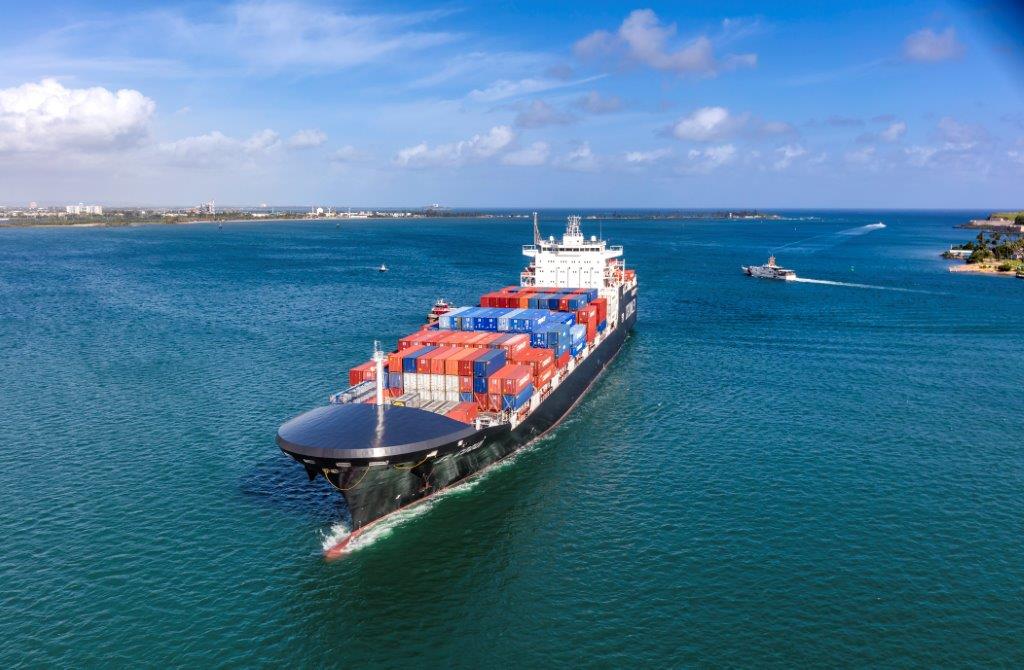 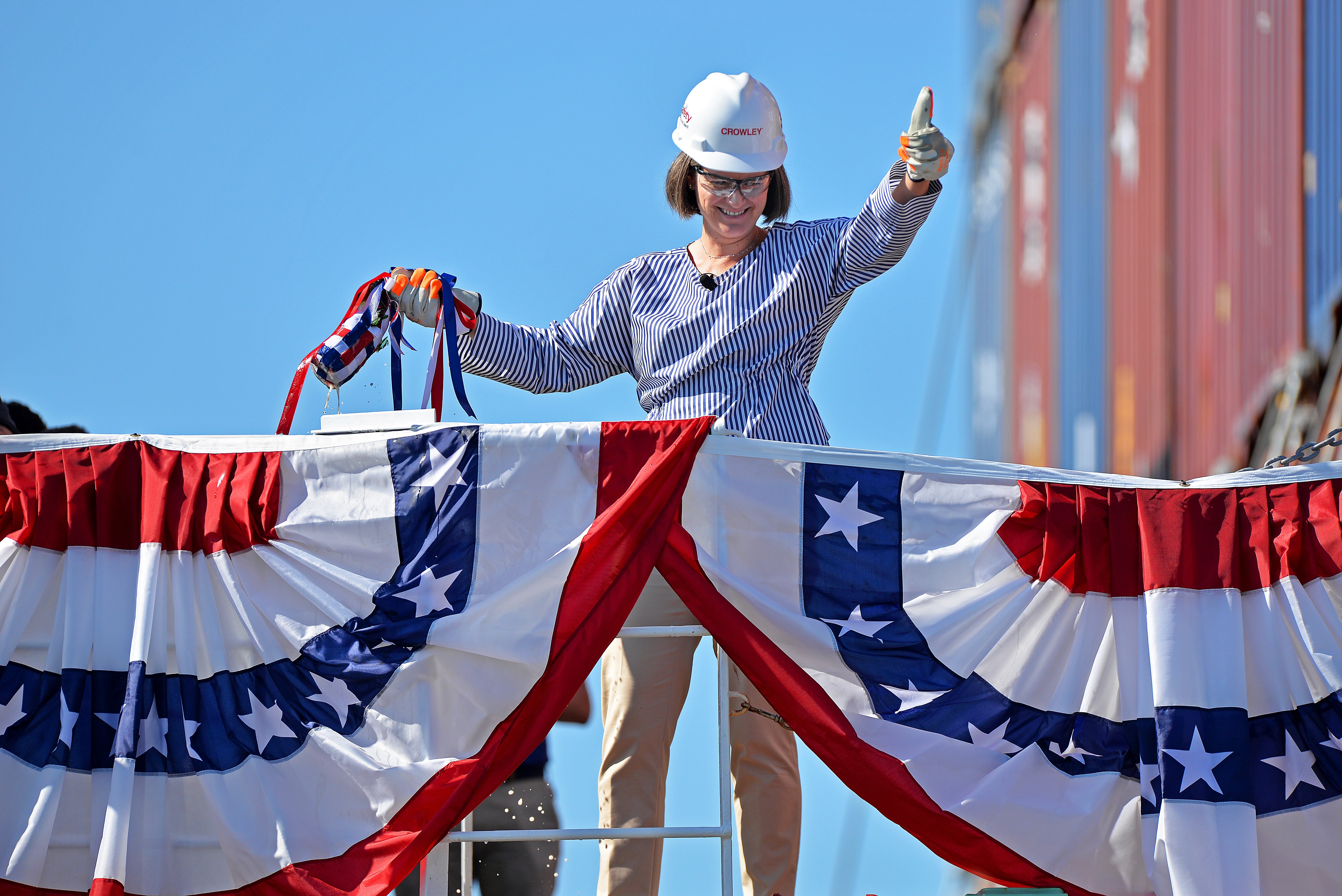 On Saturday, Oct. 20, Crowley Maritime Corp. hosted representatives of federal, state and local government, business partners and customers to celebrate the historic christening of El Coqui, the innovative new ship that has quickly become an industry leader for fast and reliable shipping and logistics services between the U.S. mainland and Puerto.

In this gallery, photographers captured the special day celebrating the crew and other men and women who brought the ship -- and its forthcoming sister ship Taino -- to reality. The vent was held at the Jacksonville Port Authority (JAXPORT) Cruise Terminal.