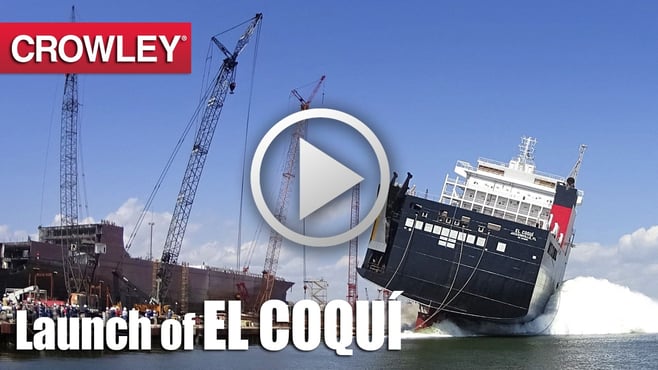 Crowley Maritime Corp. and VT Halter Marine launched Crowley’s new Commitment Class ship El Coquí, one of the world’s first combination container/Roll on-Roll off (ConRo) ships powered by liquefied natural gas in Pascagoula, Miss., a video of which can be viewed here.
Putting the ship into the water on Monday was the first in a series of milestones expected to be achieved this week as part of Crowley’s $550 million project to expand and modernize the company’s shipping and logistics services between Jacksonville, Fla., and San Juan, Puerto Rico.

El Coquí, named after a beloved frog native to the island, will now proceed through the final topside construction and testing phase before beginning service in the U.S. Jones Act trade during the second half of 2017.

“This was a special day for Crowley, VT Halter Marine and all of the men and women who designed, and who are constructing, this world-class ship,” said Tom Crowley, company chairman and CEO. “We are extremely appreciative of all the work that has been accomplished so far and look forward to the successful delivery of El Coquí later this year and her sister ship, Taíno, in the first half of next year.”

“The ship launch also marks the beginning of a very momentous week for Crowley and our Commitment Class project,” Crowley said. “We are expecting the arrival of three, new gantry cranes at our new terminal pier in San Juan later this week, and two, 1-million liter cryogenic tanks at our LNG bunkering facility being built at the Port of Jacksonville, Fla. Altogether, these investments epitomize the strong, long-term commitment we have to serving our customers and the people of Puerto Rico with the most modern and efficient supply chain services in the trade.”

El Coquí, like her sister ship Taíno, will be able to transport up to 2,400 twenty-foot-equivalent container units (TEUs) and a mix of nearly 400 cars and larger vehicles in the enclosed, ventilated and weather-tight Ro/Ro decks. A wide range of container sizes and types can be accommodated, ranging from 20-foot standard, to 53-foot by 102-inch-wide, high-capacity units, as well as up to 300 refrigerated containers.

“The launch of the El Coquí is a strong indication of our commitment to the success of our customer Crowley,” said Paul J. Albert, CEO, VT Halter Marine. “Our thanks to both the shipbuilders of VT Halter Marine and the Crowley project team for all their hard work in delivering such a significant vessel. This is a great accomplishment for both teams; we very much appreciate this opportunity to build such a magnificent ship for such a great company.”

Construction of both El Coquí and Taíno, the latter named for an indigenous people of Puerto Rico, is being managed in the shipyard by Crowley Marine Solutions, which includes naval architecture and marine engineering subsidiary Jensen Maritime.

“The new ships and related improvements in Puerto Rico and Jacksonville will add speed and efficiency for our customers shipping goods between the mainland and the island,” said John Hourihan, senior vice president and general manager, Puerto Rico services. “The environmentally friendly ships will replace tugs and triple-deck Roll-on/Roll-off barges currently sailing between Jacksonville and Puerto Rico.”

Fueling the ships with LNG will reduce emissions significantly, including a 100-percent reduction in sulphur oxide (SOx) and particulate matter (PM); a 92-percent reduction in nitrogen oxide (NOx); and a reduction of carbon dioxide (CO2) of more than 35 percent per container, compared with current fossil fuels.

Hourihan also noted the importance of the Jones Act as it relates to Crowley’s $550 million overall investment in the trade, saying “the improvements we are making would not have been possible without the Act.”

The U.S. Jones Act requires vessels in domestic waterborne trades to be owned by American citizens, built in the U.S. and crewed by U.S. mariners, thereby supporting investment in maritime infrastructure and more than 500,000 jobs and $100 billion a year in annual economic output.

The other project milestones expected to be reached soon include:

In San Juan, Crowley is scheduled to receive three new, ship-to-shore gantry cranes, manufactured by Liebherr Container Cranes, in Ireland, as early as Wednesday at the company’s Isla Grande Terminal. The cranes, which will be offloaded onto Crowley’s new 900-foot-long pier over several days, will be the first new, specialized gantry cranes to be received for operation in San Juan Harbor in more than five decades.
In Jacksonville, two 260-ton, cryogenic LNG tanks, constructed by Chart Industries in Europe, are expected to arrive at Crowley’s leased property at JAXPORT’s Talleyrand Marine Terminal within a week. The facility, scheduled for completion this summer, will be adjacent to Crowley’s operating terminal and will serve as the fueling station for the LNG-powered ships.