Crowley Maritime Corporation reached another critical milestone with the recent setting of the main engine onto El Coquí, the first of two new, Commitment Class ConRo (combination container and Roll/On-Roll/Off) ships that will be powered by liquefied natural gas for use in in the ocean cargo trade between Jacksonville and Puerto Rico.
“This state-of-the-art engine technology will add efficiency while continuing to reduce impacts on the environment, one of Crowley’s top priorities,” said John Hourihan, senior vice president and general manager, Puerto Rico services.

“Utilizing this green technology is just another way we are demonstrating our commitment to the people of Puerto Rico, our customers and the environment. It also bears mentioning that neither of these ships, which have been design specifically for the Puerto Rico trade, gets built without the Jones Act – a federal statute that provides for the promotion and maintenance of a strong American merchant marine.”

A video showing the progress of setting the engine may be viewed online here. 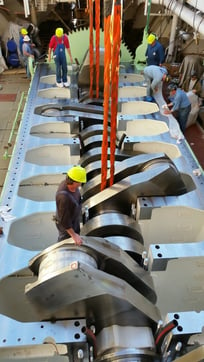 The engine was placed using a series of heavy lifts by 500-ton cranes in the shipyard of VT Halter Marine, a subsidiary of VT Systems, Inc., where El Coquí (ko-kee) and sister ship, Taíno (tahy-noh), are under construction. The engine has a total weight of 759 metric tons and measures 41 feet high, 41 feet in length, and 14.7 feet wide.

“Customers will not only be able to experience the same reliable and dedicated service they have with Crowley today, but also will have the added benefit of lower emissions once these two ships join the Crowley fleet,” said Jose “Pache” Ayala, Crowley vice president, Puerto Rico. “Crowley is making a significant investment in the Puerto Rico trade to provide faster transit times while continuing with the ability to carry and deliver the containers, rolling cargo and refrigerated equipment our customers count on.”

Liquefied natural gas (LNG) is a stable gas that is neither toxic nor corrosive and is lighter than air. It is the cleanest fossil fuel available, netting a 100-percent reduction in sulphur oxide (SOx) and particulate matter (PM), and a 92-percent reduction in nitrogen oxide (NOx). LNG also has the ability to significantly reduce carbon dioxide (CO2), a contributor to greenhouse gas emissions, as compared with conventional fossil fuels.

Designing, building and operating LNG-powered vessels is very much in line with Crowley’s overall EcoStewardship© positioning and growth strategy. The company formed an LNG services group in 2015 to bring together the company’s extensive resources to provide LNG vessel design and construction management; transportation; product sales and distribution, and full-scale, project management solutions.

These Commitment Class, Jones Act ships are designed to travel at speeds up to 22 knots while maximizing the carriage of 53-foot, 102-inch-wide containers. Cargo capacity will be approximately 2,400 TEUs (20-foot-equivalent-units), with additional space for nearly 400 vehicles in an enclosed Ro/Ro garage.

The Jones Act is a federal statute that provides for the promotion and maintenance of a strong American merchant marine. It requires that all goods transported by water between U.S. ports be carried on U.S.-flag ships constructed in the United States, owned by U.S. citizens, and crewed by U.S. citizens and U.S. permanent residents.