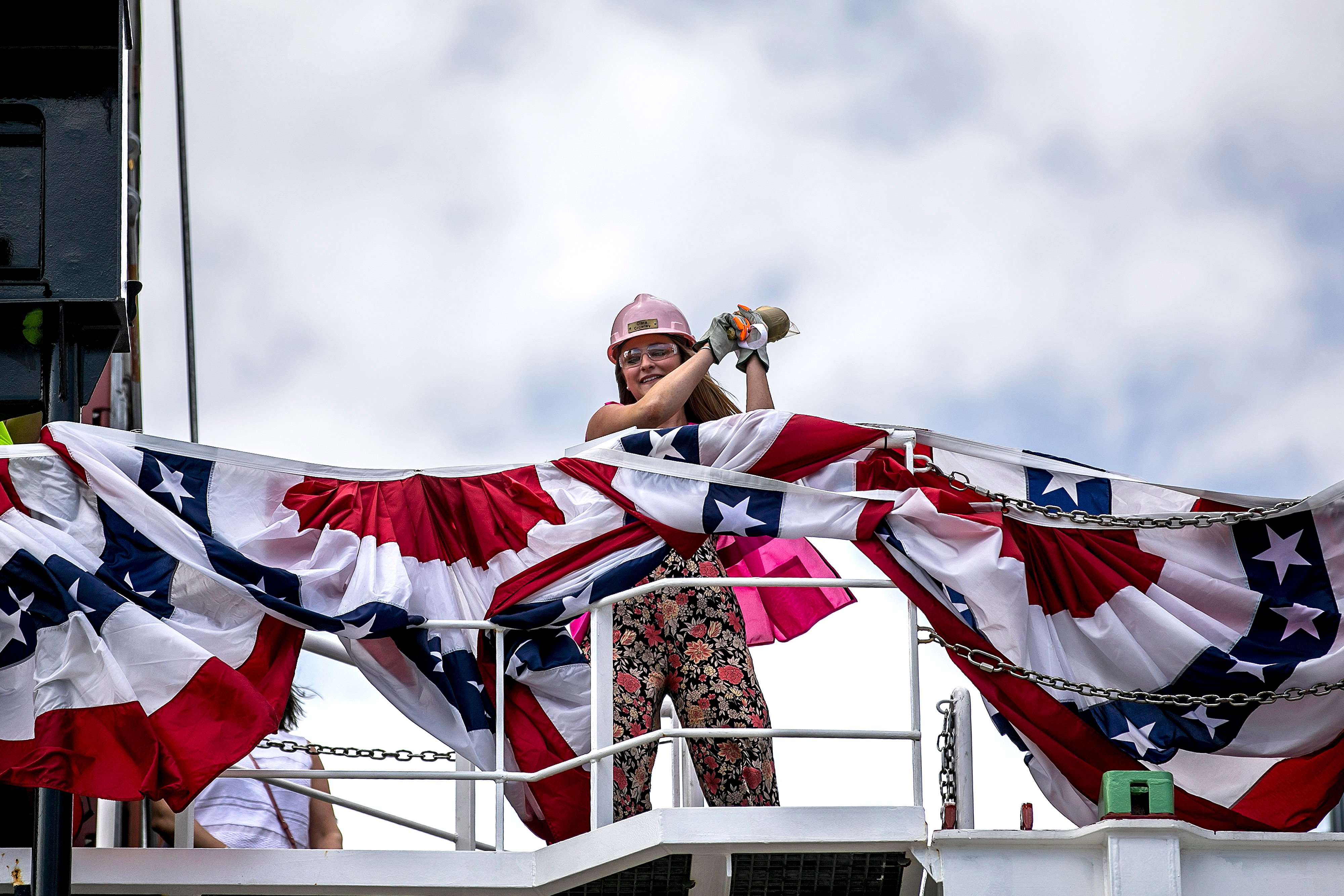 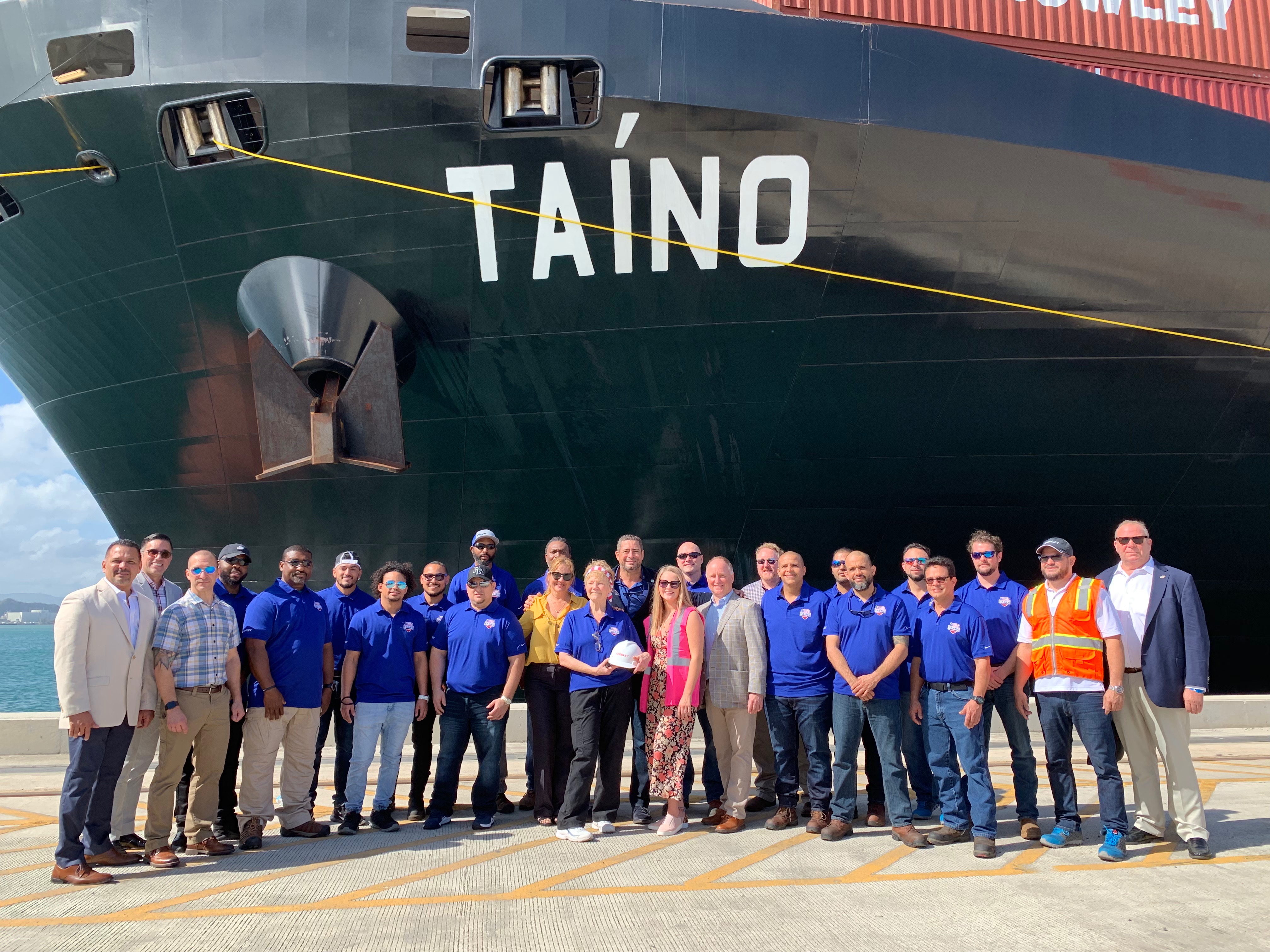 Tom and Clara Crowley stand with members of Taino's crew, Crowley's Puerto Rico team and representatives of the Seafarers International Union and the International Maritime Organization. 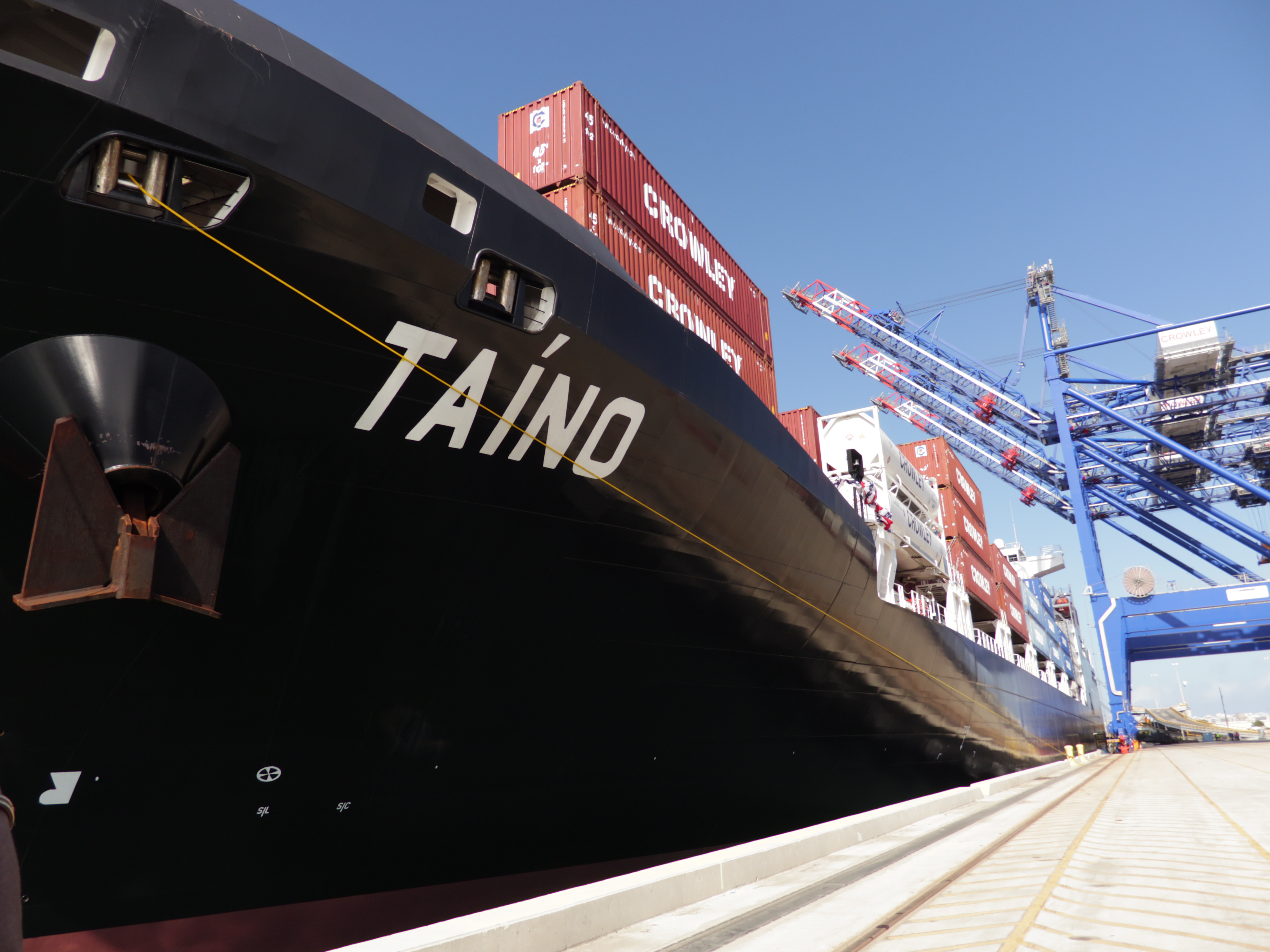 Clara Crowley, daughter of Chairman and CEO Tom Crowley and board member Christine Crowley, served as the ship’s sponsor and broke the ceremonial bottle of champagne on the bow of MV Taíno at the company’s Isla Grande Terminal before several hundred employees, customers and dignitaries. It was the first time a container ship had been christened in San Juan in recent memory.

“We are thrilled to christen this magnificent new ship here with our employees, customers and people of Puerto Rico, whom she will serve for many years to come,” said Tom Crowley. “Taíno is a source of pride for us all and in particular the men and women who built and/or crew her, many of whom are Puerto Rican.”

MV Taíno is among the first of its kind to be powered by liquefied natural gas (LNG), like its sister Commitment Class ship MV El Coquí, which entered service in 2018. LNG is a substantially cleaner fuel source that provides industry-leading environmental performance.

MV Taíno is named for the native Puerto Ricans who lived off the land with great appreciation and respect for their environment, and MV El Coquí is named for the popular indigenous frog on the island.

Both ships are 219.5 meters (720 feet) long, 26,500 deadweight tons (DWT), and able to transport up to 2,400 twenty-foot-equivalent container units (TEUs) at cruising speeds of greater than 22 knots – offering fast, 55-hour transits that reached an industry-leading on-time arrival rate of 98 percent in the past month. Each ship has enclosed, ventilated decks with capacity for 400 cars and large vehicles, a feature unique in the Puerto Rico trade.

To enhance supply chain velocity with these ships, Crowley also made significant investments in terminal and related infrastructure on the mainland and in Puerto Rico. At Isla Grande, the company added a new, 900-foot pier and three ship-to-shore gantry cranes – the first newly constructed cranes for San Juan Harbor in more than 50 years. The company also implemented a new terminal operating system and added container staging areas and handling equipment for both refrigerated and dry cargo – all while reducing gate turn times.

“This major investment, which is resulting in jobs, a positive economic impact, a cleaner environment and world-class supply chain services for Puerto Rico shippers, would not have been possible without the Jones Act,” said Crowley.

The Jones Act is a federal law that regulates maritime commerce in the United States. The Jones Act requires goods shipped between U.S. ports to be transported on ships that are built, owned and operated by United States citizens or permanent residents. Also known as the Merchant Marine Act of 1920, the law is vitally important to maintaining a strong U.S. maritime capability and national defense.

“While the act ensures that we have a robust shipbuilding capability and skilled merchant mariners in the U.S. essential to our national defense, it has also created a commercial shipping market between the mainland and Puerto Rico that is highly competitive, customized and dedicated,” said Crowley. “We should be strengthening this critically important maritime law, not tearing it down as some special interest groups espousing highly inaccurate and misleading information would like to do.”

Crowley, which has more than 300 employees on the island, has served Puerto Rico since 1954, longer than any other U.S. shipping company.