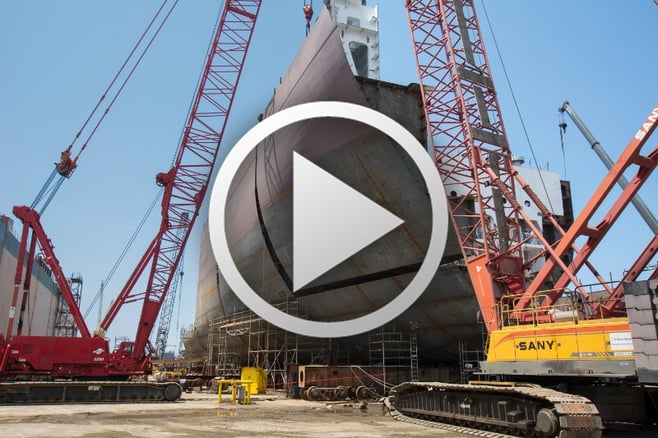 The construction of the first of two liquefied natural gas (LNG)-powered, combination container – Roll-On/Roll-Off (ConRo) ships for Crowley Maritime Corporation’s liner services group has reached a critical milestone, one that marks the construction 25 percent complete. A video describing the progress may be viewed online here.
The two ships, which will be named El Coquí (ko-kee) and Taíno (tahy-noh), are currently under construction at VT Halter Marine, Inc., a subsidiary of VT Systems, Inc., a project that began in November 2013. The ceremonial first steel plate cutting was celebrated with a ceremony held at VT Halter the following year, in October 2014.

“Week by week, we have watched the pair of Commitment Class ships begin to take shape,” said John Hourihan, senior vice president and general manager, Puerto Rico/Caribbean liner services. “It’s been incredible to watch. Once fully constructed, these new vessels will embody superior technology and construction and, while we are anxious to get them into service for our partners in Puerto Rico, we are thrilled that they are coming together on schedule.”

“The entire team at VT Halter Marine is pleased and proud to be partnered with Crowley in the construction of these magnificent ships,” said VT Halter Marine President and CEO Jack Prendergast. “It is a pleasure to see the hard work of the Crowley / Halter team come to fruition.”

The Commitment Class ships have been designed to maximize the carriage of 53-foot, 102-inch-wide containers, which offer the most cubic cargo capacity in the trade. The ships will be 219.5 meters long, 32.3 meters wide (beam), have a deep draft of 10 meters, and an approximate deadweight capacity of 26,500 metric tonnes. Cargo capacity will be approximately 2,400 TEUs (20-foot-equivalent-units), with additional space for nearly 400 vehicles in an enclosed Ro/Ro garage. The main propulsion and auxiliary engines will be fueled by environmentally-friendly LNG. The ship design is provided by Wartsila Ship Design in conjunction with Crowley subsidiary Jensen Maritime, a leading Seattle-based naval architecture and marine engineering firm.

Powered by LNG, the Crowley ships will set a new standard for environmentally responsible shipping. LNG is a stable gas that is neither toxic nor corrosive and is lighter than air. It is the cleanest fossil fuel available, netting a 100-percent reduction in sulphur oxide (SOx) and particulate matter (PM), and a 92-percent reduction in nitrogen oxide (NOx). LNG also has the ability to significantly reduce carbon dioxide (CO2), a contributor to greenhouse gas emissions, as compared with conventional fossil fuels.