It’s no secret that Crowley is making infrastructure improvements to its Isla Grande Terminal as part of a $550 million investment in the company’s Puerto Rico services. Of importance are three ship-to-shore container cranes, which will be used to load and unload containerized cargo carried aboard Crowley’s two new, Commitment Class combination container/Roll-On Roll-Off (ConRo) ships, powered by liquefied natural gas (LNG). The 65-meters tall Liebherr container cranes are some of the most technically advanced, ship-to-shore gantries in operation nearly anywhere today.

What still may be a secret to you, however, is how Crowley can offer maximum container loading and unloading efficiency, while turning cargo for customers faster than other carriers. The reason is due in large part to these nine smart innovations Crowley is incorporating in the terminal upgrades:

Contributing to faster service are the cranes’ operator-assist mode and automation settings. Outfitted with an array of sensors, lasers and cameras, the cranes are evaluated at lightning speed as they work – literally hundreds of times a minute. Internal computers use the feedback to optimize crane movements, reducing the energy used and chance for human error, and raising productivity.

Typical gantry crane spreaders (the part that attaches to a container) are designed to handle standard 20-foot and 40-foot containers with widths of 96 inches. If an operator handles larger containers, however – such as Crowley’s popular 45-foot or 53-foot by 102-inch-wide containers – they must either change spreaders or attach special adapters. These extra steps can really stack up, adding significant delays during stevedoring operations. Solving this problem, Crowley developed the first-of-their-kind telescopic spreaders (shown above), which can accommodate standard and non-standard container sizes alike, saving time in the Puerto Rico trade lane. 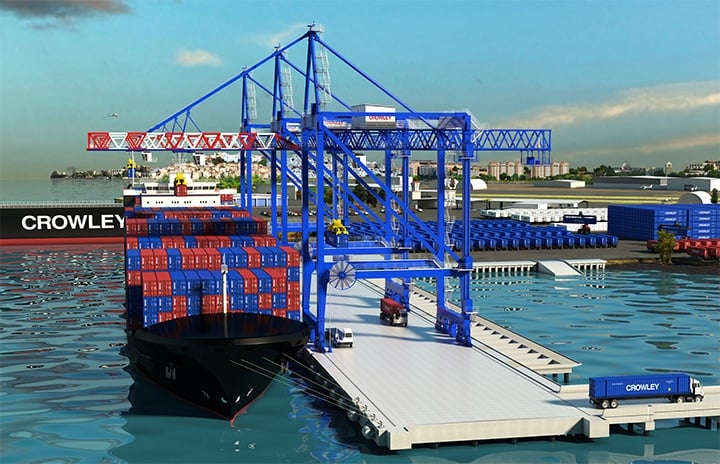 Typical stevedoring requires on-the-ground spotters who judge when a truck is properly aligned beneath a crane before a container can be lifted or lowered. One-upping this system is Crowley’s automated truck positioning system, which uses lasers tucked between the crane legs to indicate when the truck’s load is “under the hook.” Simple traffic lights communicate when the driver should stop and when the crane operator has the green light to proceed with cargo handling. This simple move reduces errors and increases efficiency.

What is significant about the cranes goes beyond the technologies listed above, however. It’s what was built into the design in case of equipment failure: emergency drives. These back-up drives kick on in the unlikely situation that one of the cranes’ main drives fails, but are important because a failure could prevent the docked ship from departing the pier until a repair is made.

Running from the terminal’s new electrical substation to the pier are thousands of feet of electrical feeder wires, which power operations at the pier. In the off-chance an underground line becomes damaged, however, it could take more than a week to repair – leaving the business without electricity to handle cargo. Crowley made the investment to install redundant feeder lines, in isolated conduit duct banks, that automatically activate should power disruption ever occur.

Custom to Crowley’s Puerto Rico operations, the cranes have also been designed to work problem-free in the island’s often windy conditions. The solution includes an energy chain (e-chain) system, which folds loops of crane cable neatly within a protective structure instead of allowing them to dangle (and tangle) in the wind.

The cranes are expected to have a 40-year life cycle, so Crowley designed them to go the distance efficiently. The company increased scantlings to prevent premature structural failures due to fatigue. Additionally, the cranes’ mechanical systems are oversized to allow for higher operating efficiencies and reduced wear and tear. Energy is saved by use of liquid-cooled electrical drives that power the cranes motors, 100-percent LED lighting and more. 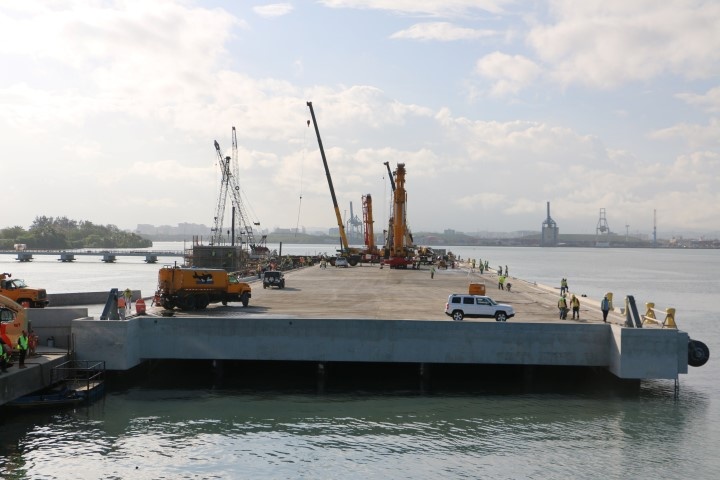 Though current Puerto Ricans will likely never see flood levels predicted with a 100-year storm event, Crowley designed for it anyway. As such, the pier’s elevation was measured more than 100-year storm surge levels, an astonishing 11 feet above the mean low-water level. Crowley’s pier is the only one on the island with this protective elevation.

Puerto Rico resides atop a large fault system, offering the potential for strong earthquakes. To protect against seismic activity, Crowley designed the terminal, pier and cranes to not only withstand, but absorb, the energy helping to mitigate possible damage and business disruption.


The list above clearly explains how and why Crowley has an edge over the competition in Puerto Rico, but Tucker Gilliam, vice president, special projects, took it home when he said:

“Purchasing new cranes with best-available technology is a key component to ensuring the terminal will operate safely and efficiently now and for many years to come. No other shipping line’s operation in San Juan will be as modern or efficient. This is brand-new, high-tech equipment we are installing. It’s a huge investment that will give our terminal operators the tools they need to achieve higher efficiency, faster cargo discharge for customers and increased safety.”